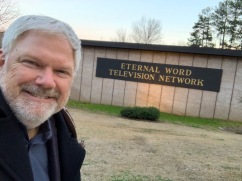 Doug Keck, President and Chief Executive Officer at EWTN had only good things to say about the documentary. “Every so often a film comes along that has the power to change public discourse. Fatal Flaws is that kind of film. In his travels through four different countries, director and presenter Kevin Dunn reveals the dangers behind the cultural acceptance of the assisted dying ideology — and does so in a clear and charitable way. A must watch for Catholics and non-Catholics alike.” says Keck.

The announcement comes on the heels of Kevin Dunn’s return from Australia where he gave talks and presented the film in five different states. “There are so many jurisdictions rushing into legislation without realizing the long-term, negative effects on the disabled and elderly.” says Dunn. “EWTN is one of the few broadcasters which is consistent in recognizing the dignity of the human person in all stages of life.”

Alex Schadenberg and the Euthanasia Prevention Coalition co-produced the film with DunnMedia. For over 20 years, the EPC has been stalwart in its efforts to preserve and enforce legal prohibitions and ethical guidelines prohibiting “mercy killing”. “This broadcast is another important step forward in educating the public.” says Schadenberg.

In its 38th year, EWTN is the largest religious media network in the world. EWTN’s 11 global TV channels are broadcast in multiple languages 24 hours a day, seven days a week to over 300 million television households in more than 145 countries and territories.

We will have more to come on the broadcast in the weeks and months to come.